YOU HAVE (0) ITEM(S) IN YOUR CART. CHECKOUT NOW
Helping In Jesus' Name ®
Hope For Haiti

The 73 boys and girls, ages 2 to 16, cared for at the Greta Home and Academy in Léogâne, Haiti, had their lives changed last year when they moved into brand-new facilities built by Samaritan’s Purse and named after Fox News commentator Greta Van Susteren for her strong advocacy on behalf of the Haitian people and support for the work of Samaritan’s Purse.

Indoor plumbing, a personal bed, clean clothes, and three meals a day are unattainable luxuries for the majority of children in Haiti. They once were out of reach for the children who now live at the Greta Home and Academy too, but no longer.

The new facility was built on the site where an orphanage was reduced to rubble by the horrific quake that struck the country in 2010. It is located in Léogâne, the epicenter of the disaster. More than 30,000 men, women, and children lost their lives in this area.

Samaritan’s Purse hit the ground within 24 hours of the disaster, and we’ve been working to help people there recover ever since. Our teams have provided assistance for more than one million people over the past few years, including drilling wells for clean water, sending volunteer doctors and nurses to treat the sick, and strengthening the church with pastors’ conferences and discipleship classes.

In the devastating disaster’s aftermath, dozens of vulnerable children were brought to the location, where they lived in the ruins. Upon learning of these little ones’ plight, Samaritan’s Purse provided temporary housing nearby and began caring for them. 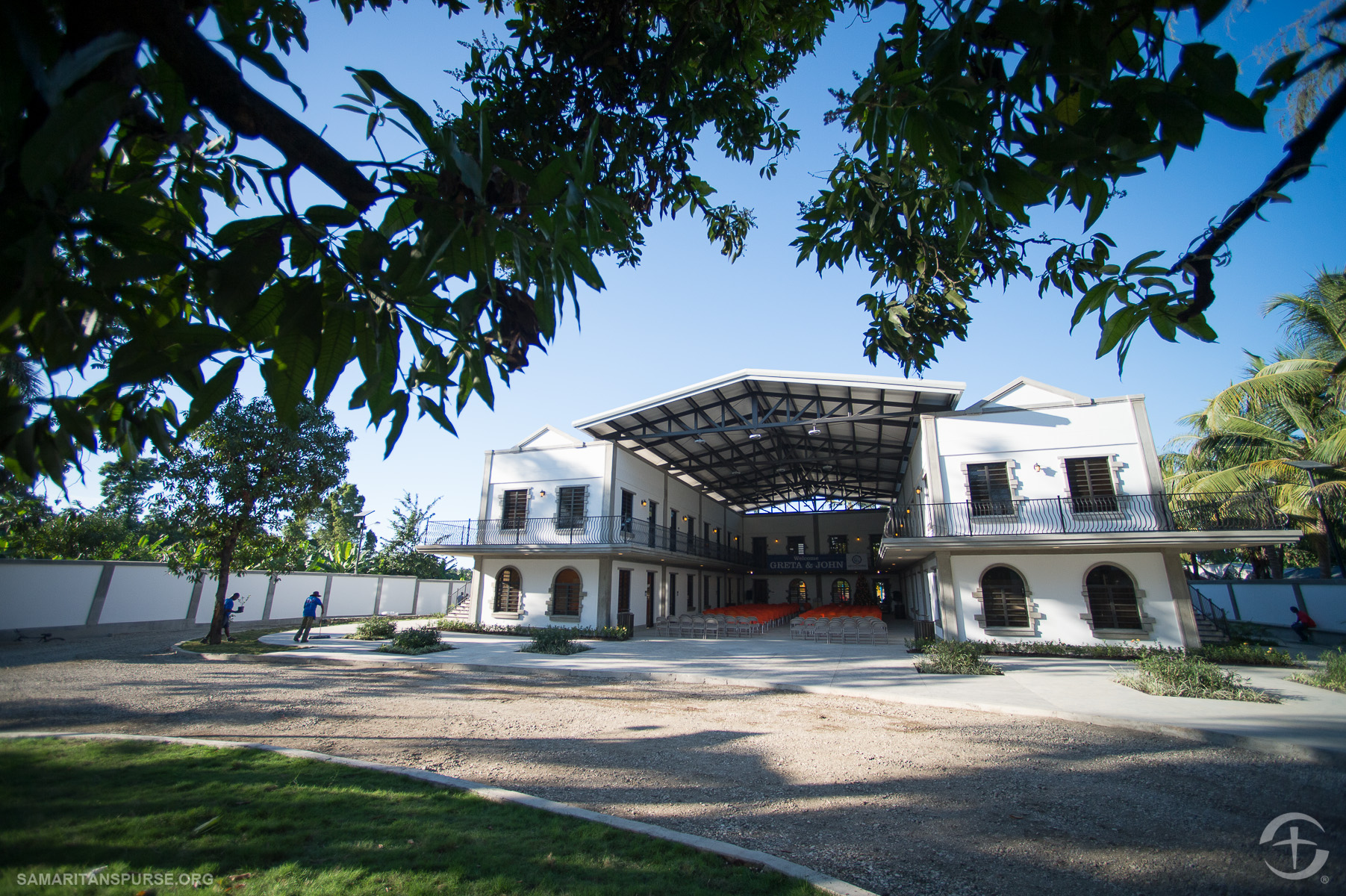 The Greta Home and Academy was dedicated to the glory of God in December 2012 with Van Susteren, her husband John Coale, and Franklin Graham in attendance. Van Susteren spoke encouragingly to the children in French, one of Haiti’s two official languages. “It pleases me greatly to be here because you all are very special,” she said.

Ten licensed professors teach at the school. Each student is able to work on an inexpensive, durable laptop. Seventh grade will be added next year, and the academy plans to enroll 50 students from the community as well.

The Greta Home and Academy is first and foremost built on the foundation of the Gospel. With the support of Samaritan’s Purse, the children will have opportunities to succeed and become Christian leaders for their country. On the first day at their new home, each child received a set of play uniforms bearing the promise of Jeremiah 29:11—“‘For I know the plans I have for you,’ declares the Lord, ‘plans for welfare and not for evil, to give you a future and a hope’” (ESV).

In addition to meeting physical and educational needs, spiritual discipleship is of primary importance for the staff. There are morning and evening devotions, and all of the children attend a local church on Sundays. Boys and girls seven years and older completed our discipleship program, The Greatest Journey, this year, and 26 received Christ as Savior.

In early 2013, these 26, along with 13 other children who had made decisions to follow Jesus through church attendance or devotions at the Greta Home, were baptized in the Caribbean Ocean (cover photo). “We have found great
joy in teaching them about God,” said Pastor Kenol Despinasse, teacher of The Greatest Journey curriculum. “These children will be our successors and will bring the Gospel to the world after us.” 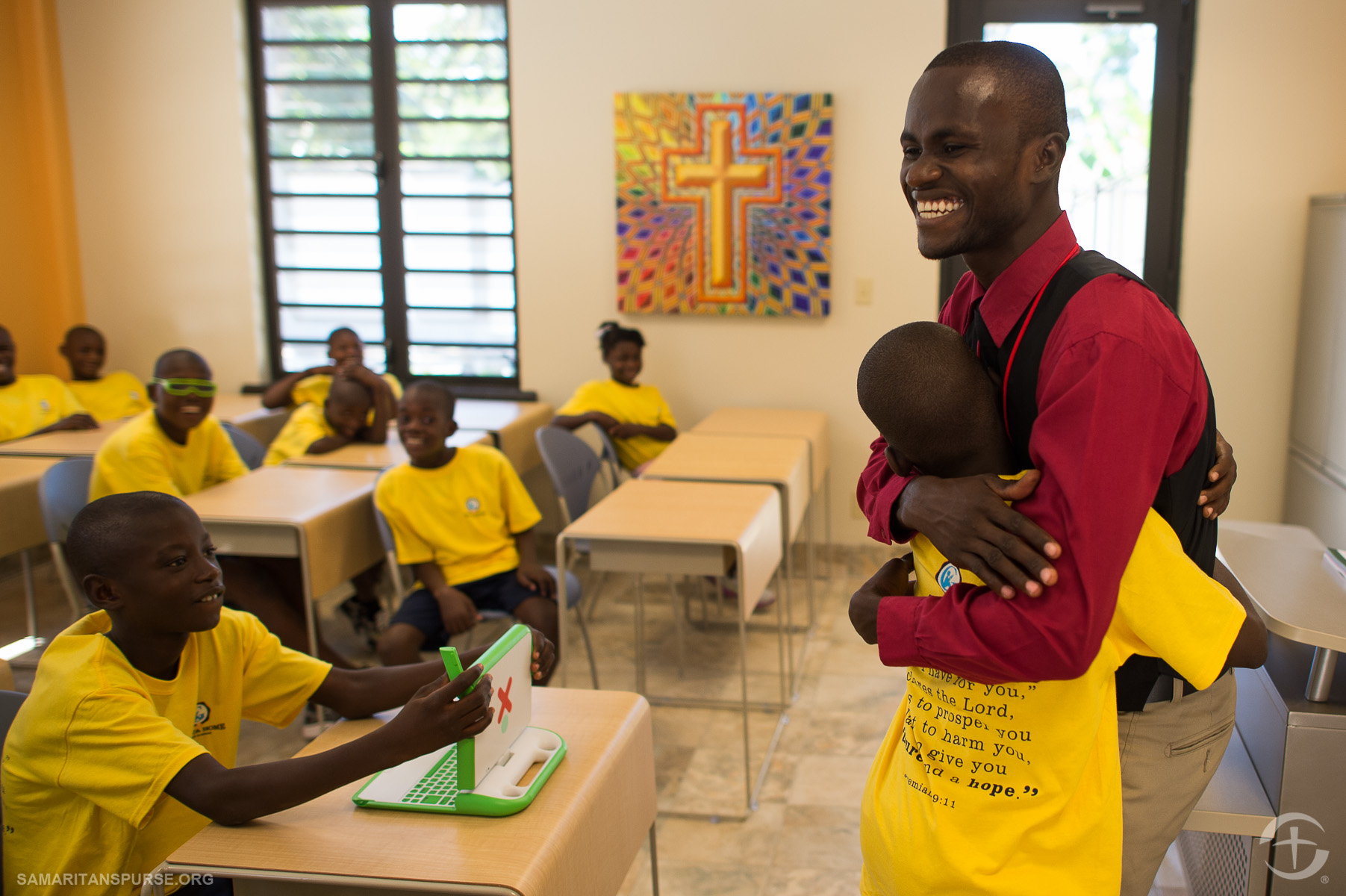 Fourteen-year-old Jeff Moise was one of those who was baptized. A year after the disaster, he was still living in a tattered tent with his mother and two siblings. His father died when he was very young, and his mother had barely been able to provide for her children even before the earthquake. She made the difficult decision to take them to the Greta Home.

Moise said he wanted to be baptized after he completed The Greatest Journey. He was baptized by Pastor Pierre Julien, leader of Samaritan’s Purse ministry programs in Haiti. After his baptism he said, “Today is a great day because I am living a new life. When I look at what Jesus Christ has done, I wonder how He could love me so much to put me in this home.”