Tears and Generosity in Serbia

In Serbia people were sheltering from the rain all day and Christian partners are being lined up to provide assistance at key points.

Alan Cutting is in Serbia, on the northern border with Hungary, working in partnership with local church networks to deliver compassionate services to the thousands of refugees currently making their way up into Europe. Alan says, “It’s a rainy day in Serbia. Not sure if it rained on the road to Emmaus, but we want the resurrected Jesus to surprise the traumatised traveller with hope again in Serbia today.”

Alan send back the following stories:

The official statistics estimate the daily throughput (arrival and departure) of 2,500-3,000 people at this well publicised location on the present refugee trail north. Some arrive here having walked the length of the country, but as this is the point that the road runs out and that the Hungarian border can only be accessed along an old railway track; this is also the point that those who have had the means to pay for some road transport have to exit and walk.

From a steady stream of taxis and coaches spill hundreds (yes, up to 150 people are crammed into some of the buses) of young men, older men, and families. This afternoon two police cars, a local church presence and the Samaritan’s Purse distribution point were the only markers on this crucial point in the refugees journey.  People don’t stay here long.  They don’t stay anywhere long.  On and on and on they go.  With a local Baptist Church pastor, we distributed food and non-food items carefully selected by our partners on the ground.  As expected, hygiene items were snapped up with particularly grateful thanks. 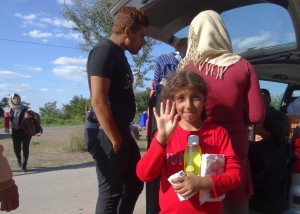 Watching the steady stream of people passing our simple distribution point was mesmerising; overwhelming. Whenever I saw a family with 0-2 year olds I was reminded of Matthew 2, and the journey south that Jesus made as a baby. Once again these days, weeping and great mourning is heard; mothers weeping for their children and refusing to be comforted, because some of them are no more. But this time they are fleeing north. North into what? North into where? Wherever I could find English speakers I abandoned my post and walked a little way with them.

I cried and cried for hours
X (most people told us fictitious names when we asked them) is a father of four. This family tumbled out of a taxi they had shared with another family, and he gathered his children together, a young son and two teenage girls.

“We are from Aleppo (Syria),” he said. “I am an engineer and an interior designer.” I was not surprised. There was a creative style and dignity about him, even in these conditions. “I know Europe well. I have travelled to several European countries. My sister lives in London and my brother in Paris. But I’d never even thought of leaving Syria, and even now, I’m waiting for the day I can return. But what could I do? We firstly went to Istanbul and I looked for work, but you have to speak Turkish to have any chance. My wife was exhausted so we agreed she would stay there and rest awhile, and I would bring the family into Europe.”

His 16 year old daughter took up the story with an openness, an innocence and a trust in her voice that, considering her circumstances, seemed to me extraordinary. “We crossed a huge river and then the sea. It was at night. I was so scared. I cried and cried for hours. We’ve been travelling now for two weeks.”

“Where are you heading for?” I asked.

“I don’t know. Where do you think we should go?” she asked me.

In truth, they had no idea. Purposefully travelling north, but not knowing where they were going. I’ve never before had a complete stranger ask me with total sincerity where she should spend the rest of her life.

Turning back to her father, I commented on just how many people I’d met today who were from Aleppo. “I know,” he replied, “We keep seeing people we knew from our neighbourhood.”

I asked him what he’d left behind in Aleppo. “Nothing,” he said. “Everything was bombed. My house, my new car, my land, my father…’

It was then that his voice cracked, and he swung his head down and away, taking a few steps out of reach of our conversation, completely unable to say any more.

Overwhelming generosity
There was such grace upon the young families. A young father not only carried a large rucksack on his back, but also his three year old daughter on his shoulders, whilst his English-speaking wife carried their sleeping baby in her arms. They came to my attention as they patiently waited behind a swelling crowd of people who were crowding around the Samaritan’s Purse distribution point and, spotting their remarkable patience, I slipped through the pressing crowd and introduced myself.

“I’m really sorry”, I said by way of introduction, and having learned the biggest need of the moment, “but we have no water left.” 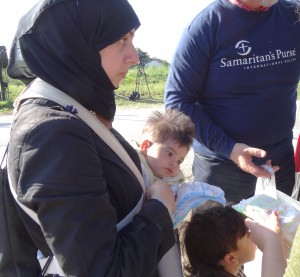 “You have no water?” she replied, looking anxious. “Don’t worry. We have some water you can have. It’s in our rack sack. Just a second whilst I put the baby down and I’ll get it for you.”

At that moment an older man, who had just opened a packet of cookies that my colleague had given him, dipped his grubby hand into the packet and with a toothless grin, thrust one of them into my hand.

We all walked along the railway track together.

“So how are you feeling today?” I asked.

“We’re fine, thank you.  We’re really tired, but we’re fine. Thank you very much for asking.”

I was deeply stirred by the grace and shalom that came off this little family as we talked easily together, but I had to pull myself away and return to my colleagues.

“I really must turn back now,” I said, “Although I’d love to walk with you further. God bless you and protect you as you travel.”

“Thank you so much,” they said with a big smile. And with that they were gone.