Nine months ago, Abraham arrived in Greece from the African country of Eritrea. He came seeking peace. Now he has found, blanketed in a freeze, a country normally known for its mild weather year-round. 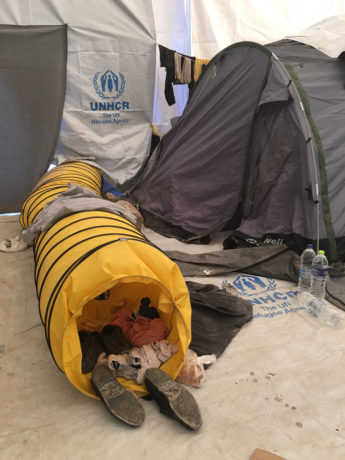 THE HEATERS WE’VE INSTALLED IN LARGE ACCOMMODATION STRUCTURES IN MORIA PROVIDE WARMTH AND ALSO A WAY OF DRYING OUT CLOTHES.

Many Africans have never seen winter weather, and those now in Greece are experiencing a first winter that’s particularly harsh. But it’s also been brutal for more than just people from equatorial countries.

Temperatures have plummeted in some regions of Greece, and snow and rain have drenched much of the country, leaving even native Greeks dumbfounded. They’ve not seen a winter like this in decades.

“A harsh and snowy winter on a Greek island was probably the furthest concern from anyone’s minds when they began their journey here to Lesbos,” said Ryan Lane, the area coordinator for the Samaritan’s Purse operations on Lesbos. “Whether they be refugee, foreign aid worker, or native Greek, everyone was taken aback by the severity of the weather which struck our island over the past week.”

Drying Out, Warming Up

The situation has become dire for many of the more than 15,000 refugees living on Greek islands such as Lesbos, Samos, and Chios. The bitter cold is adding to already-tense conditions in these islands’ refugee sites, some of which have grown to a population of twice their capacity. Living in uninsulated single-wall tents in these overcrowded conditions has created an unforeseen misery among many families awaiting transfer to mainland Greece.

Samaritan’s Purse staff members have been working since November to help supply winter clothes, safe and warm sleeping conditions, and a place to dry out. 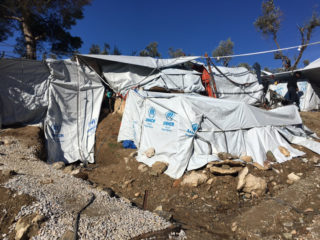 OUR TEAMS HAVE INSTALLED INSULATED FLOORING AND ADDITIONAL SHELTER MATERIALS TO KEEP THE HARSH ELEMENTS OUT AND FAMILIES WARM.

“There is a lot of rain, which means a lot of water in tents,” said John Mamakos, a Samaritan’s Purse staff member on Lesbos. “When it starts, it rains a lot. It’s very difficult for people living in tents. The clothes, the socks, the shoes, everything gets wet. Imagine how hard it is to get them dry in conditions like this.”

Along with the United Nations High Commissioner for Refugees, the Greek government, and other organisations, Samaritan’s Purse has been working hard to ensure refugees have dry, warm places to sleep at night.

This past week, we began running a heating system on-board a Greek naval vessel serving as sleeping quarters for single men. We outfitted the ship with a charging station and provided warm blankets, socks, hygiene kits, and other useful items for those who moved on board to get out of the cold and mud.

In refugee sites across Greece, we’ve also assisted UNHCR in replacing tent dwellings with living containers that are insulated and weather resistant.

Where containers are not available, we’ve distributed winterisation kits to reinforce and further insulate dwellings. 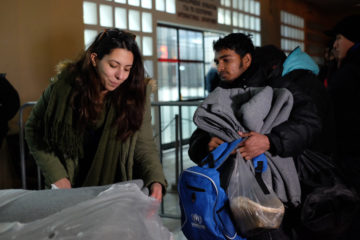 SINGLE MEN MOVING ABOARD A NAVAL VESSEL RECEIVE BLANKETS AND OTHER WINTER SUPPLIES.

The tent winterisation kits include insulating floor mats and canvas tarps we install overhead to block wind, rain, and snow. We’ve distributed blankets and sleeping pads, and more than 14,000 people have received items at our winter clothing distributions. With these resources in place, many of the refugees are able now to prepare themselves for the coming wintry weeks.

“This is a good home,” said a man from Gambia, pointing to his new tent. He bent down to show how it’s built up on wooden pallets so that it’s not in the mud.

The needs among refugees living in Greece continue to grow as hundreds of new arrivals land monthly on the islands from war-torn countries in Africa, Asia, and the Middle East.

Please continue to pray that God will open the hearts of refugees around Greece to Him and also for our staff members as they seek to provide safety, comfort, and hope in Jesus’ Name.