GOD IS USING A BOLD CHURCH PLANTER, WITH SHOEBOXES IN HAND, TO SPREAD THE GOOD NEWS OF JESUS CHRIST TO UNREACHED AREAS.

The bike ride through the path of deep sand to Kitomondo takes Pastor Marco Kayumbo more than two hours to negotiate. He prays and sings to pass the time.

Kitomondo is a rural community outside Tanzania’s largest city of Dar es Salaam, and it’s where Pastor Marco started a church almost two years ago.

“I just went like a man with a passion to do the work of God, and when I reached that place I knew it was the right place,” Pastor Marco said. “But then I thought ‘what do I do now.’” 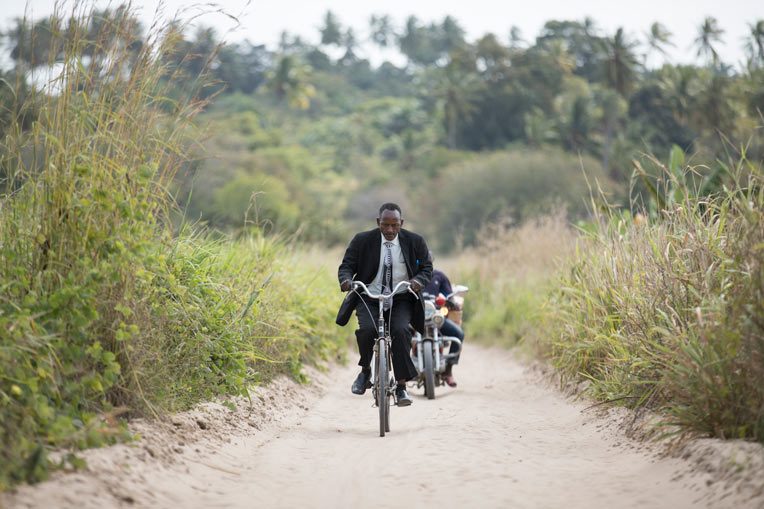 After his first trip, he felt as if he’d failed. They cursed him. They gave him no place to stay, and they even cast spells on him so he might die in his sleep or at least leave and never come back.

But Pastor Marco is a 22-year church planting veteran, and he learned early on that God always provides a way. And besides, a tough place like Kitomondo was the exact kind of place he’d asked God to take him. 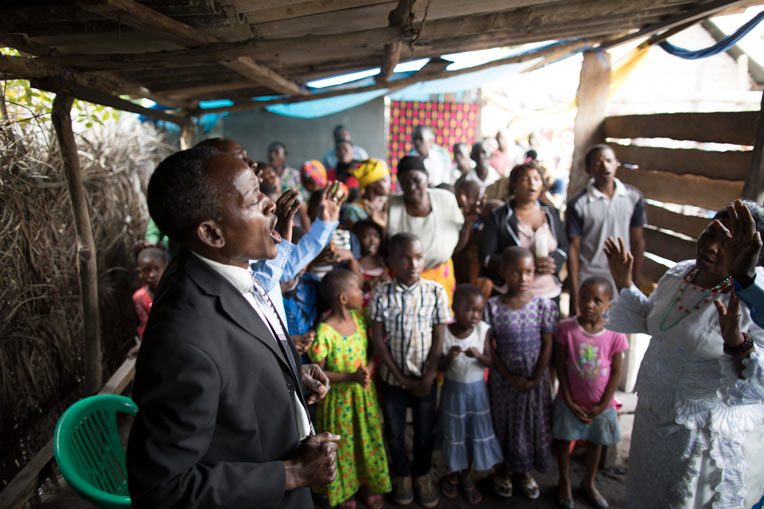 PASTOR MARCO KAYUMBO CELEBRATES WITH CHURCH MEMBERS ALL THAT GOD IS DOING THROUGH MARANATHA CHURCH KITOMONDO.

He fasted and prayed for a week, and there were two ways God answered his prayers: the villagers began to believe Pastor Marco was invincible to their witchcraft and, more important, they started to believe he and his God cared for them.

This is because he returned to the village with a very tangible demonstration of love in 500 Operation Christmas Child shoebox gifts for their children.

A Shoebox Gift Is a ‘Very Powerful Tool’

As with many of the rural areas of Tanzania, Kitomondo had never seen anything like this—so many free gifts with no strings attached. Pastor Marco says that it’s God’s power working through these simple shoebox gifts that has allowed him to plant churches in so many difficult areas of coastal Tanzania.

“When you give me a gift box and I have it in my hand, I know I have a very powerful tool,” Pastor Marco said. “If I’m going someplace difficult, I just put the gift boxes on my bicycle and I go to that place because I know I can get an opening.” 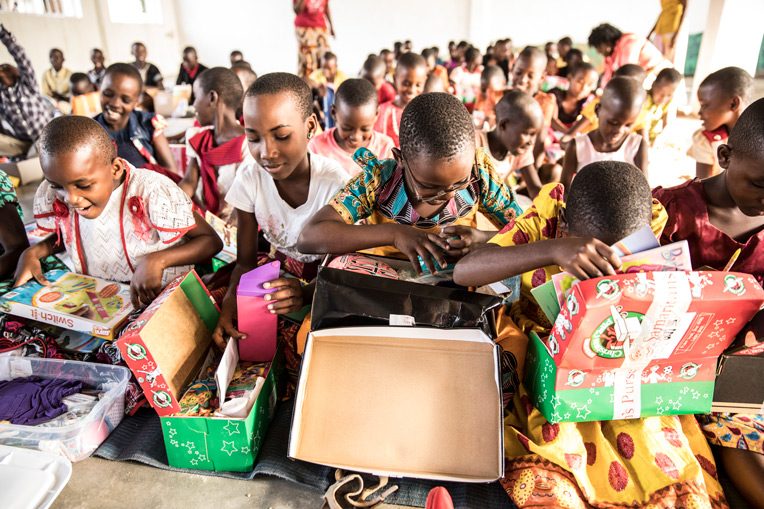 SHOEBOX GIFTS CREATE SMILES AND OPEN DOORS FOR THE GOSPEL IN TANZANIA.

After that initial shoebox distribution two years ago, dozens of children joined The Greatest Journey discipleship programme and an additional distribution was scheduled for 180 more shoebox recipients the same year. Last year Pastor Marco held a distribution in the area for 600 more children.

The public meetings are an answer to the fervent prayers of the few believers in the community, many of whom were previously hiding their faith from their Muslim neighbours.

Islam is the dominant religion in most of coastal Tanzania. Life is interrupted five times daily by the Muslim call to prayer that resounds from minarets.

Many Christians moved to Kitomondo to find work, but to protect their families, they took Muslim names and Muslim identities. The power of the Gospel has now emboldened believers to emerge from the shadows. Others who were lost have been saved. 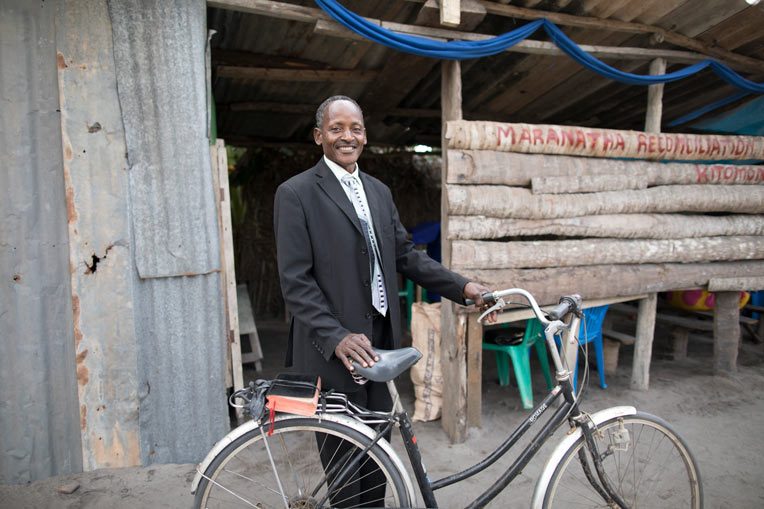 “I preach and teach the Word of God so they will not live in fear but will be open about their Christianity,” said Pastor Marco, who said he and the pastors he’s mentored are now even allowed to teach in schools. “The devil has failed in this place.”

The blessings of God continue to show through. The Muslim leaders of Kitomondo have become some of the church’s greatest allies, local landowners have donated land to the church, and soon they will break ground for a building to replace the current sanctuary with its roof of sticks and tin.

Pastor Marco will pass the work in Kitomondo to the younger pastors he’s been training.

“I feel that I am almost near the end of my ministry, and what I desire is to have members of the church to do the will of God. I want to help build leaders who can go and do the work and I come alongside them to help,” he said. “So even though I’m coming to the end of my life, my desire continues to grow for planting more churches.” 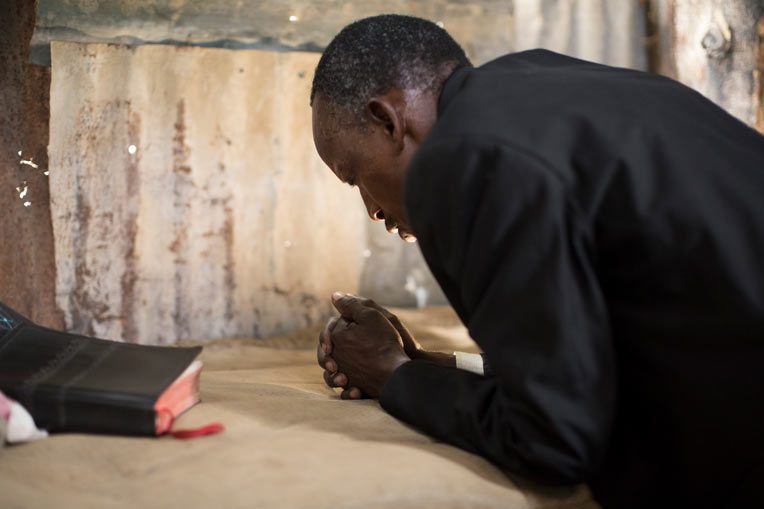 PASTOR MARCO KAYUMBO PRAYS IN HIS STUDY/LIVING SPACE WHERE HE SLEEPS WHEN HE VISITS KITOMONDO.

Until about five years ago, Pastor Marco had never heard of Operation Christmas Child, a project of Samaritan’s Purse. And he’d certainly not considered shoebox gifts as a church planting tool.

Before he’d started to use them that way, he would enter communities and expect nothing but rejection and even violence. “They spit on us and sometimes the men would chase us with machetes and threaten to chop us up,” he said.

God has used shoebox gifts to reach children and to break down barriers in rural areas like Kitomondo, where people are suspicious of outsiders, especially those carrying a belief and message that challenge Islam and a community’s culture. 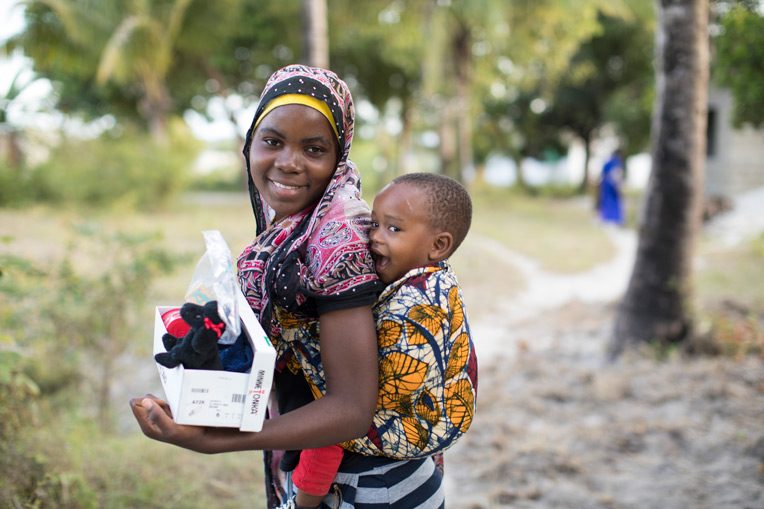 Shoebox gifts, though, have communicated something deeper than ideology or a way of life. They’ve demonstrated to hearts enslaved by fear that God’s love is a free gift bought for them by His Son, Jesus Christ.

“I don’t have words to explain the importance of these shoeboxes, except to explain what God has done before my eyes,” Pastor Marco said. “These people without Jesus are in bondage, but through the gift boxes He has made them receptive to us. I don’t need a car. I don’t need money. I just need shoeboxes.” 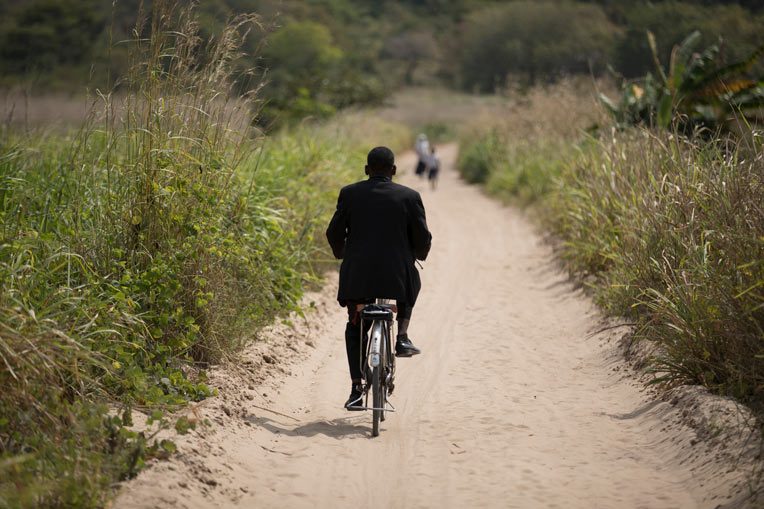