South Sudan has one of the highest infant and child mortality rates in the world. If a child makes it to their first birthday, they have a 1 in 10 chance of dying before their fifth birthday. The numbers speak to an unconscionable crisis, but numbers alone are a callous way to describe the anguish of mothers who bear, nurse, cradle, comfort, and finally lay to rest child after precious child.

Fatna is one such mother. At 31, she has been pregnant 15 times, given birth to 16 children, and buried 10. Coming from an area of South Sudan where the local clinic charged high prices for maternity care, Fatna gave birth at home to all but the first and last child, without the help of a midwife. Many died within the first few weeks of life, others lived only a few years before succumbing to childhood illnesses. 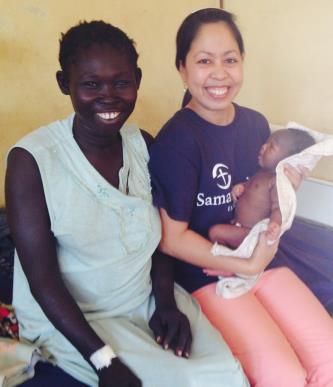 When the time came to deliver, Fatna was ill and couldn’t make it to the hospital immediately. For three days, she struggled to bring her child into the world, but her labor was obstructed and she was in desperate need of a Cesarean section. As her strength was giving out, neighbours found a way to bring her to the emergency room.

Lorelee and Dr. Atar have conducted many c-sections together. When Fatna arrived, they were ready. In less than an hour, Fatna was safely resting with her healthy little girl.

They day after her c-section, Fatna’s oldest daughter came to the maternity ward to meet her new sister. She clung to her grandma’s hand, shy and uncertain, but when she saw her sister, her face lit up. Her smile was a perfect echo of her mother’s. Both knew only too well how close they had come to being separated. Without care at the hospital, Fatna and the new baby wouldn’t have survived.

Fatna’s smile defies despair. She knows suffering, but she also knows the joy of loving her living children and remembering the ones she has lost. Each one is precious. Each life is known and loved. As a midwife, Lorelee passes this message to every woman she meets as she fights to protect the lives entrusted to her care.

Fatna named her daughter Lorelee. She is the newest of many little Lorelees, toddling around Maban as testament to the good care received when help meant the difference between life and death. The lifeline continues past birth. With the hospital nearby, they have protection from common, treatable illnesses that claim so many children in South Sudan.

The work of Samaritan’s Purse at Maban County Hospital will not make much of a dent in South Sudan’s mortality statistics, but the work is done for Fatna, Baby Lorelee, and the host of other lives saved daily. It runs by the economics God has given us, where each life is immeasurably valuable.

Read more about the crisis in South Sudan ▶