Hope Among The Ruins In Northern Iraq

Father Benham is the priest in charge of St George’s Church in the centre of Bartella, just 9 miles east of Mosul. Except that he currently doesn’t have a congregation to minister to, a house to live in or a village to go back to.

Two years ago on the 6th of August 2014, ISIS attacked and took control of the Christian village of Bartella, then home to 5,000 Christians. 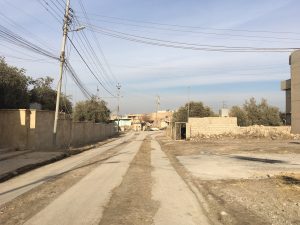 Entering Bartella, which has been deserted since ISIS occupied it within a matter of hours in August 2014.

They had just three hours to flee and many succeeded in doing so.

Now, Bartella is a ghost town. A ghost town that has no electricity or water and where every house and shop has been ransacked or destroyed. ISIS left few buildings standing and looted every place. The scene is a devastating tribute to the force that moved through it.

I was invited to travel back to Bartella with Father Benham and four members of his congregation. For some in the party it was their first time to return since the village was liberated just 40 days ago. 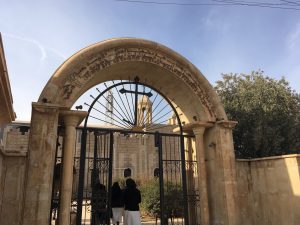 Father Benham and four members of his congregation enter their church. For some of the group, it is the first time they have done so since ISIS occupied it.

As they walked into St George’s church and saw the charred remains of the altar and sanctuary, the crosses that had been ripped down and destroyed and the windows that had been smashed, their natural instinct was to weep. But then something profound and beautiful happened as their mourning turned into prayers – chanted at the top of their voices – prayers of worship and thanksgiving for their safety, and prayers of petition for protection.

They vowed to God to rebuild the church and started singing a quiet song – the first act of worship to take place in this church for two years.

The church staff showed us their living quarters, openly weeping again as they assessed the destruction and looting that had taken place in their homes. 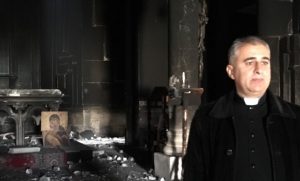 Father Benham stands amongst the ruins of his church; a smashed altar behind him is a tribute to the force of destruction that moved through it.

They told me it would be at least six months before they could return to live here, and even then they hold concerns for their safety.

Will there ever be an established worshipping community of God’s people again at St George’s or in Bartella? Will Christians ever have the courage and strength to return here to the Ninevah plains? Many have chosen not to, but there are some, such as Father Benham who are determined to continue to shine a light here in a dark part of the world.
– Simon Barrington, Executive Director of Samaritan’s Purse UK 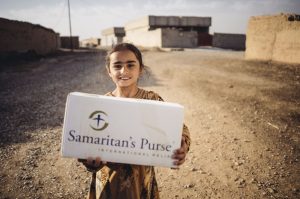