FRANKLIN AND JANE GRAHAM AND THEIR SON EDWARD WERE RECENTLY ON TARAWA TO GIVE OUT GIFT-FILLED SHOEBOXES TO CHILDREN IN NEED.
Franklin Graham presented a bold vision to the Operation Christmas Child team late last year (2018): Deliver gift-filled shoeboxes in Jesus’ Name to every child on 1,000 Pacific islands—more than half a million kids. He believed those island nations and the children who live on them had been forgotten, but he was determined that would not be the case going forward. 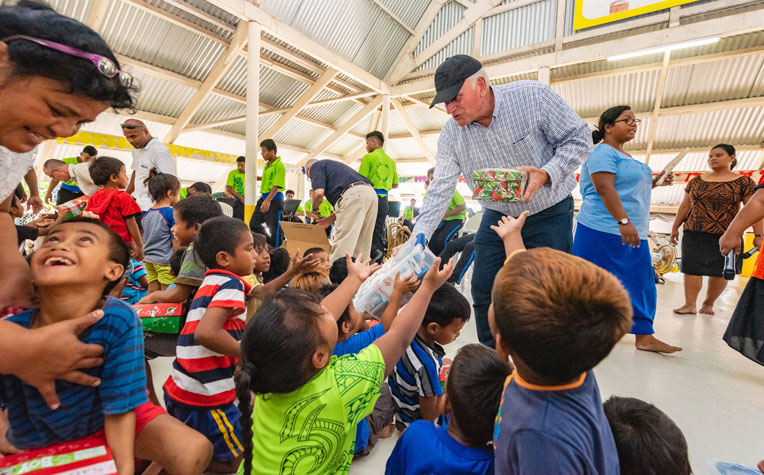 “I want to take a thousand islands in the next five years and reach these islands for Christ,” Graham said on a recent visit to Kiribati to participate in Operation Christmas Child distributions. “Here in the Pacific, people have very little hope. These are poor areas. People don’t come here. There are no tourists here. But we are going to be here. We are going island to island to island taking the Gospel of Jesus Christ.”

Graham’s Pacific island initiative took root last year when he went to the island of Saipan with a Samaritan’s Purse disaster response team after Typhoon Yutu. The storm ripped through the U.S. commonwealth and caused catastrophic destruction.
“When Dad went to visit there and saw the carnage and just island life in the Pacific, he realized they needed the hope of Jesus Christ and thought Operation Christmas Child had the right resources to be able to tackle the problem,” Graham’s son Edward said. Edward joined his father on the recent Kiribati trip. “It is a huge challenge. It goes back to Bob Pierce (the founder of Samaritan’s Purse) and the God-room principle. You plan so boldly and so big that it’s sure to fail without God intervening. Dad’s vision was just that.” 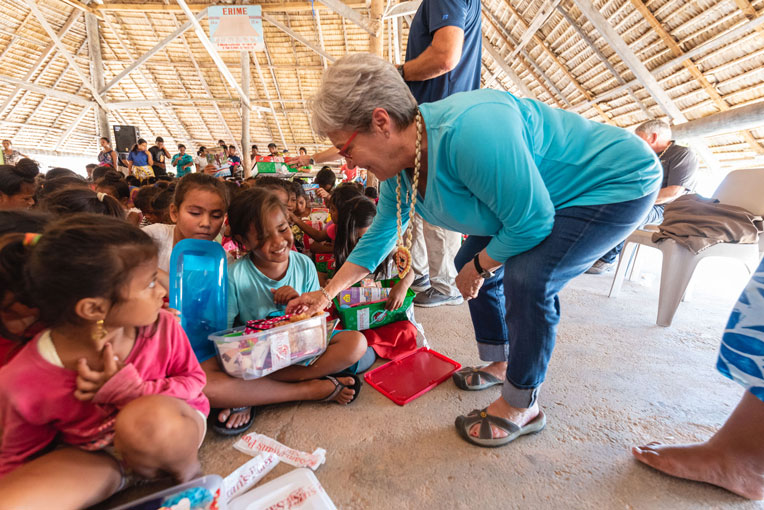 JANE GRAHAM DELIVERS GIFTS AS WELL DURING AN OUTREACH EVENT IN THE PACIFIC ISLANDS.

The initiative quickly began with the first shoeboxes being delivered to Saipan earlier this year. In all, more than 10,000 prayerfully packed boxes will be distributed there. The Marshall Islands followed (25,000 boxes) with the nation of Kiribati next.

The first island visited in Kiribati was Tarawa, the site of one of the bloodiest Marine battles with the Japanese during World War II. Jane Austin Graham’s father, Ned Cunningham, fought there in 1943 with the 2nd Marine Division and helped liberate the atoll. Franklin, Jane, and Edward Graham visited Tarawa to help distribute the first shoeboxes on the island and witness the first class of The Greatest Journey—the 12-lesson discipleship course designed for Operation Christmas Child shoebox recipients. 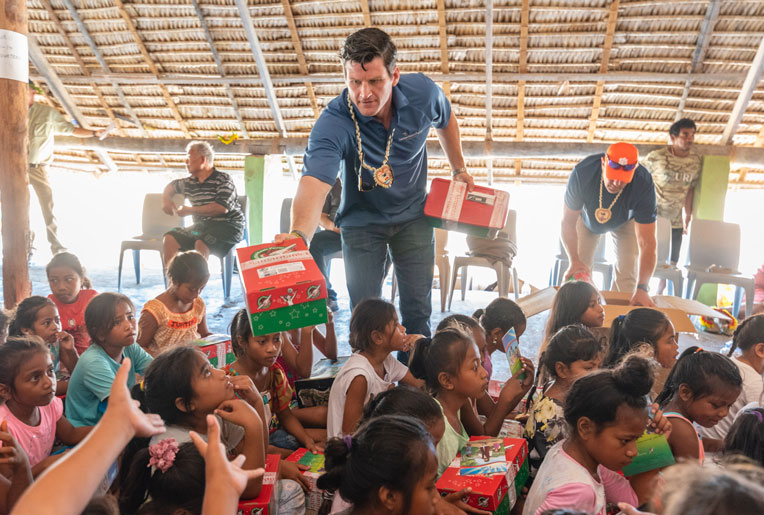 “To look out on that beach and know what my grandfather went through, with my limited taste of combat, my heart breaks and hurts for him,” said Edward, who served 16 years in the U.S. Army. “And now we are bringing the Gospel here. Never in his wildest dreams when he was coming ashore would he have ever imagined there would be a ministry called Operation Christmas Child with his daughter, son-in-law, and his grandson coming here in order to bring the name of Jesus Christ. If he and the other Marines had not been here, Operation Christmas Child would not have been here. He paved the way. So, Operation Christmas Child started in 1943 on Tarawa. Little did he know.”

Dire poverty exists throughout Tarawa. Most families live in simple one-room, tin or thatched roof shacks or huts with dirt floors. Jobs are scarce, and the population is growing faster than the local economy can keep up. Kids are everywhere. And it’s these boys and girls who are being reached through Operation Christmas Child. 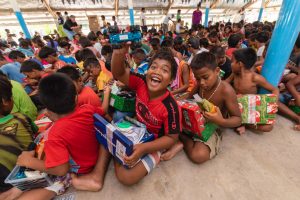 Children are excited to show off their shoebox gifts during a well-attended outreach event. 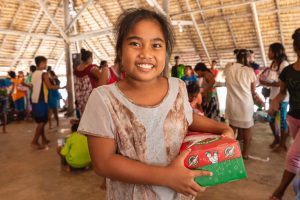 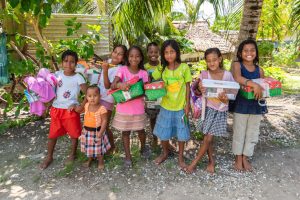 Children gather to celebrate the new gifts they’ve received. These boys and girls not only received special presents but also an opportunity to hear the Gospel of Jesus Christ. 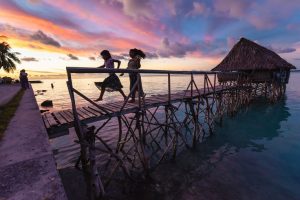 Local children enjoy a sunset on the island, one of many Pacific islands where Samaritan’s Purse is seeking to share the Gospel through Operation Christmas Child.

Around 40 children attended the first shoebox distribution on Tarawa at the Four Square Church in the village of Eita. Following the event, Anand Singh, the Operation Christmas Child international field representative for Southeast Asia, said, “What happened here will travel fast (through the villages).” He was right.

Two days later at two different shoebox distributions, about 150 children were expected at each church. Instead, nearly 400 kids showed up at the first event and over 300 at the following one. The kids at each celebration enjoyed singing uplifting songs, like “Jesus Loves Me,” and listening to a Gospel presentation. Joyful screams then filled the air as the kids eagerly opened the boxes filled with toys, hygiene items, and school supplies.

“I don’t think these children have ever received a gift. Let alone, a box of gifts,” Anand said. “Today, they heard about Jesus Christ and that box represents His love. Whenever they see that box they will know they received it free and that salvation is free for them.”

But it’s not just the kids who were excited. Their parents were overjoyed, too. 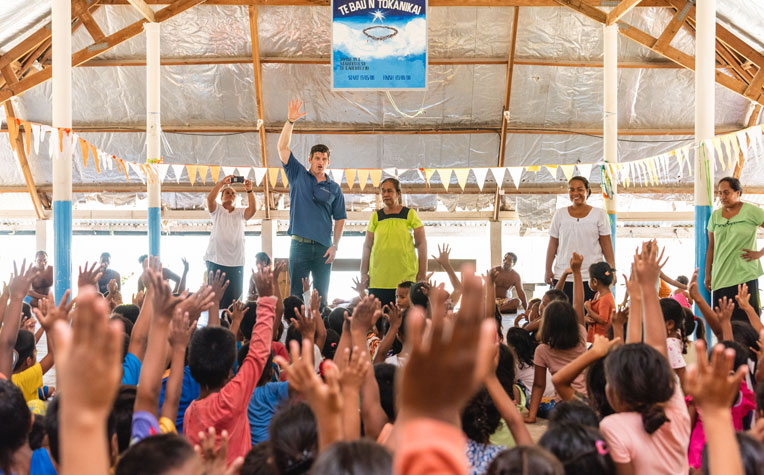 EDWARD GRAHAM HAD AN OPPORTUNITY TO SPEAK TO A GROUP OF CHILDREN DURING THE OUTREACH EVENTS.

“All of the kids are really happy and, as a mother, I am really happy too because it is the first time I have seen such a great gift given to my children,” one mum said. “My children have never experienced this kind of gift. They are overjoyed. We can see that (Operation Christmas Child) really cares about our youth and our children here in Kiribati.”

As for the additional kids who showed up, Tyler Mahaffey, regional manager of the Pacific for Operation Christmas Child, said, “It’s exciting that we had people pouring into the local church. We barely had space to seat all the kids and parents were cramming in to hear the Good News. We’re thankful for the opportunity to see the church overflowing.”

Over 30,000 shoeboxes will be distributed in Kiribati, according to Jim Harrelson, vice president of Operation Christmas Child. By the end of 2019, it is expected that nearly 75,000 boxes will have been given out in the Pacific and 25,000 kids will be enrolled in The Greatest Journey. When the Pacific island initiative is complete, we anticipate well over 500,000 children will have heard the Gospel and received a tangible expression of God’s love through a shoebox gift. Approximately 200,000 boys and girls will be going through The Greatest Journey.

“In Acts chapter 1, Jesus gives us the Great Commission to be His witnesses and to go to the ends of the earth, and we’re a part of that,” said Harrelson, who was also on the recent Kiribati trip. “Being here in Tarawa just reminds us all what a privilege and opportunity it truly is to be a part of this worldwide movement. We’re fulfilling Scripture and that’s powerful.” 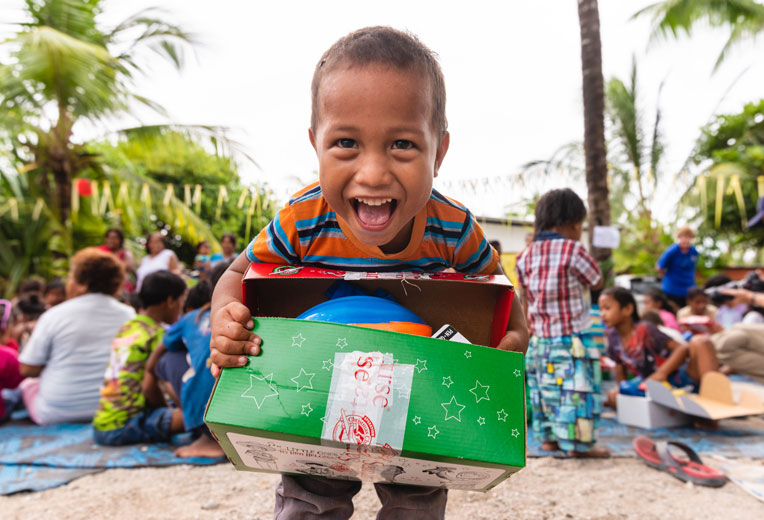 A CHILD EXCITEDLY SHOWS OFF HIS SHOEBOX AFTER RECEIVING THE SPECIAL GIFT DURING AN OUTREACH EVENT IN HIS VILLAGE.