A jumbo jet packed with 50 tons of supplies is on its way to help thousands of Nepalese families survive the winter in rugged, mountainous areas.

“There is a humanitarian crisis unfolding right now in the remote areas of Nepal,” said Samaritan’s Purse President Franklin Graham from Charlotte Douglas International Airport. “The people are literally dying. We are sending this plane and if the need is there, we will send another. And if the need is still there, we’ll send another one.”

Recent heavy snowfall in the Himalayas has created a deadly situation for those displaced by devastating earthquakes last spring. Many families are still living in tents as they brave their first post-earthquake winter.

Our teams will be rushing the relief items to over 5,000 families in several quake-affected districts. Each family will receive a winter kit with jackets, hats, gloves, socks, thermal underwear, blankets, hot water bottles, a sleeping pad, solar lamp, and an emergency bivy sack (small sleeping bag). More than 1,700 households will also receive a stove. 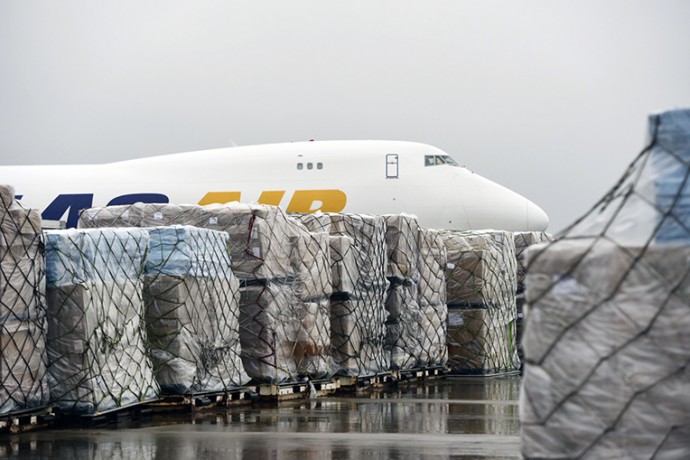 After addressing the gathered crowd, Graham prayed: “Father, I pray that You will use these blankets and the shoes and these warm coats to let the people of Nepal know that You love them and that You care for them.” 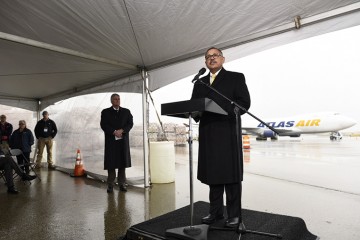 Nepal’s ambassador to the United States, Arjun Kumar Karki, spoke at the airlift.

Nepal’s ambassador to the United States, Arjun Kumar Karki, spoke at the airlift ceremony today. He thanked Samaritan’s Purse, Franklin Graham, and staff for helping the country of Nepal at this difficult time.

He said: “Our country has gone through several disasters in the past ten years. We have had a war, we have had flash floods, and we have had the earthquake. We have lost more than 9,000 lives and hundreds of thousands of people have been affected. They are homeless. We have also lost so many rural hospitals, public school buildings, cultural heritage sites, and historic monuments. And now we are further devastated by the blockade between India and Nepal [which is preventing supplies from arriving to land-locked Nepal]. Time now is very important. We had the earthquake in the summer and now we are in the middle of winter. The support we are receiving from Samaritan’s Purse is really a big help.”

The supplies from Samaritan’s Purse will be distributed next week and will expand the work we have already been doing. Our teams have reached more than 6,000 households with winter supplies over the past several months.

Nepal’s prime minister accompanied us on one of these recent distributions to an isolated northern village. Afterward, he requested further assistance from our teams for the vulnerable people in his country.

See More On Our Work In Nepal

Samaritan’s Purse has been working in Nepal since the April 2015 earthquake by providing emergency shelter, clean water, food, and other relief to over 60,000 families. Our teams remain committed to helping the disaster victims recover.
Please pray that we will be able to reach families quickly with these much-needed supplies and that our work in Nepal will communicate the love of Christ.