Samaritan’s Purse has opened a Diphtheria Treatment Centre in Bangladesh to serve Rohingya refugees. These displaced families are in desperate need of medical care. The now 80-bed centre, constructed in just a few weeks, is receiving patients upon referral; we are the only diphtheria centre for the southern half of the largest refugee camp.

UPDATE: The centre received its first patients on 1st January 2018, and has now seen more than 700 individuals, with over 200 admitted, including dozens in critical condition. People with diphtheria have come in gasping for air, and then within a 24-hour period, they’ve experienced an amazing turnaround as a result of treatment. Many of the ill have been young children. The centre has already opened up opportunities to share why Samaritan’s Purse is there and why we do what we do in Jesus’ Name.

More than 600,000 Rohingya have fled into Bangladesh from Myanmar in the past four months and are living in crowded refugee camps. Our treatment centre will be in Kutupalong camp, where the outbreak is concentrated. The camp is the largest among the Rohingya refugee camps, with more than 800,000 people (including those who arrived before this Autumn).

Our multinational staff and medical personnel are on the ground to operate the centre, which is offering expert treatment and compassionate care in Jesus’ Name. Additional medical equipment and supplies have been recently delivered as well.

Diphtheria, a serious bacterial infection that affects the mucous membranes of the throat and nose, is spreading among Rohingya refugees living in cramped, difficult conditions. Over 1,800 cases have been reported by the World Health Organisation. Children are especially susceptible, and most have yet to be immunised against this disease. If left untreated, the illness can cause severe damage to one’s kidneys, nervous system, and heart—and it can be fatal.

We also are at work at Memorial Christian Hospital in Bangladesh, where many Rohingya refugees are receiving surgical care. Read more about our work there.

Please pray for the Rohingya who are suffering during this crisis. Pray they will come to know and understand God’s love for them.

Note: This article was originally published 21st December and has been updated to reflect the opening of the centre on 31st December. The most recent update was added 5th January. 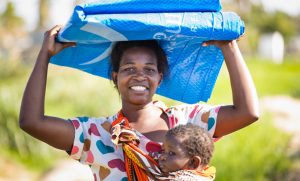