Samaritan’s Purse is providing direct care to patients suffering from the deadly disease.

The terrifying and highly contagious Ebola virus continues to spread in West Africa. Ebola, which causes massive internal bleeding and has a mortality rate of 60 to 90 percent in most situations, has claimed more than 600 lives.

In response to this resurgence, Samaritan’s Purse deployed a team of medical personnel to provide direct clinical care to those infected with the disease.

“This is one of the most deadly diseases in the world, and it must be contained as quickly as possible,” Samaritan’s Purse President Franklin Graham said. “We want to do all we can to help bring this outbreak under control.” 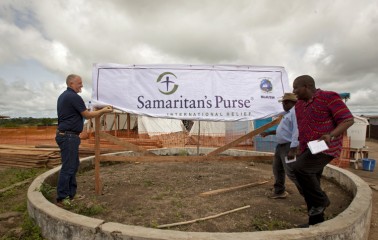 On 8 July, Samaritan’s Purse assumed responsibility for the Foya Case Management Centre (CMC) in northern Liberia, near the border with Guinea. The handover ceremony included representatives from the community, Medecins San Frontieres (Doctors Without Borders), and Liberia’s Ministry of Health and Social Welfare.

“When the outbreak began, I told my staff that we were not going to run away from this,” Kendell Kauffeldt, Samaritan’s Purse Country Director, Liberia, said during the ceremony. “We will be like the Good Samaritan who did not run away, but stayed to help. In the end, we will celebrate together on how God carried us through.” 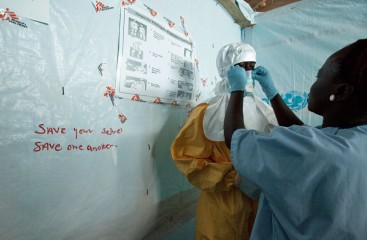 A  Foya Case Management Centre hygienist gets suited up to enter the isolation unit. ”Save yourselves,  save one another” is written as a reminder on the wall to assist each  other in putting on and taking off of the personal protective equipment

The Foya CMC has been treating Ebola patients since April. A large local staff will continue to fulfill their responsibilities alongside medical personnel of the Samaritan’s Purse disaster response team. Facilities will be expanded, and the team is reaching out to other remote health clinics in the area to provide education and training.

Samaritan’s Purse has been responding to this unprecedented outbreak of Ebola since March, spearheading a national awareness campaign in Liberia that has reached more than 420,000 people with prevention education and hygiene items. Many residents remain in fear or denial.

Samaritan’s Purse is working in cooperation with Liberia’s Ministry of Health, the U.S. Centers for Disease Control and Prevention (CDC), United Nations agencies including the World Health Organization (WHO), and other NGOs to provide life-saving care for patients in multiple locations – ELWA Hospital near Monrovia and now at Foya.