WE PRAISE GOD THAT CHILDREN AND THEIR PARENTS ARE COMING TO CHRIST IN A REMOTE VILLAGE IN MEXICO THROUGH THE OUTREACH OF OPERATION CHRISTMAS CHILD.

Note: For an exciting update to this story, see our latest article about the dedication of the first church in La Laguna.

Eusebia heard about Jesus on the radio. A couple of decades ago, that was the main way for the Mexicanero/Nahuatl people living in the mountains of northwest Mexico to hear the Gospel. The only road to Eusebia’s village of La Laguna was a river bed that flooded for several months each year during the rainy season.
Eusebia listened with increasing interest to the Gospel messages from Pastor José Benítez’ radio broadcast in Tecuala, a town several hours away. She wanted to know more, so she wrote Pastor José a letter. 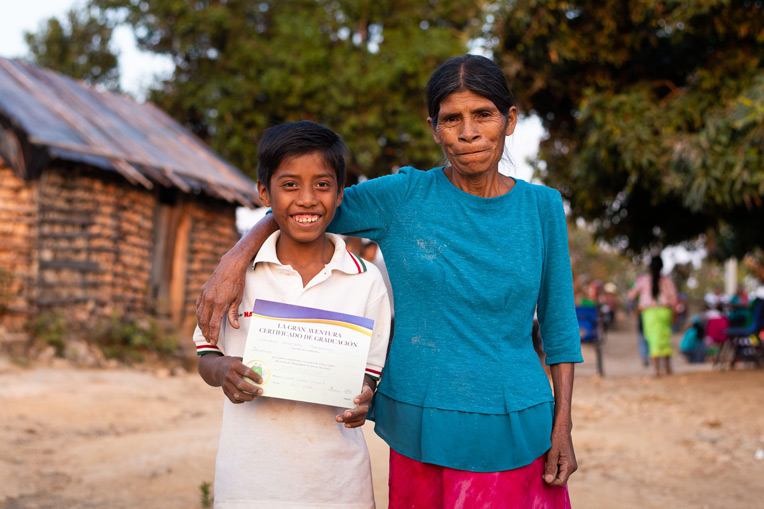 EUSEBIA, ONE OF THE FIRST BELIEVERS IN JESUS CHRIST IN HER VILLAGE, AND HER GRANDSON JONATHAN CELEBRATE HIS GRADUATION FROM THE GREATEST JOURNEY. JONATHAN GAVE HIS HEART TO CHRIST DURING AN OPERATION CHRISTMAS CHILD GOSPEL PRESENTATION AT THE VILLAGE.

Pastor José used his radio broadcast to answer her, saying that he was praying for Eusebia and planning to bring her a Bible. But, he said, she didn’t need to wait in order to place her faith in Jesus as her Saviour and to tell others about Him.

That is still Pastor José’s message to Eusebia and the dozens of other believers in the village that have come to faith in Christ since he brought God’s Word to them, most recently through Operation Christmas Child.

Eusebia was one of the first people in her village to become a believer in Jesus Christ. “I have experienced personally the Gospel,” she said. “I believe that God is good and that He has brought me salvation. There is no other way to find salvation without Jesus.”

Over the years, the believers in the village grew to four. The number has been increasing dramatically since Pastor José handed out Operation Christmas Child shoebox gifts at a Gospel outreach event nearly two years ago. 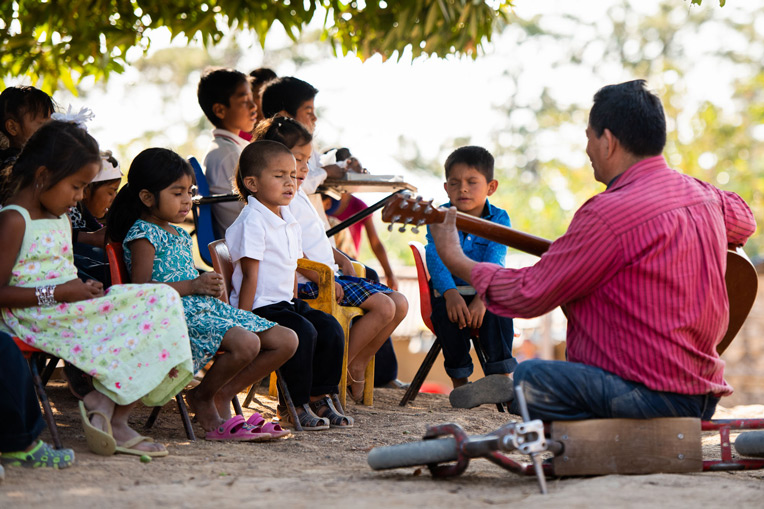 PASTOR JOSÉ BENÍTEZ LEADS CHILDREN IN SONG AND PRAYER IN LA LAGUNA DURING THEIR GRADUATION FROM THE GREATEST JOURNEY.

Eusebia’s 11-year-old grandson, Jonathan, was one of several children who prayed to receive Jesus Christ during the Operation Christmas Child Gospel presentation. “At first I thought that Jesus was speaking only to the adults, but I learned that Jesus loves children, too,” Jonathan said. “I learned to pray to Him. I like to pray.”

Several parents who attended the Operation Christmas Child event with their children also accepted Jesus as Saviour and Lord that day, including Maria who now attends an ongoing Bible study at Eusebia’s house.

“I thought that we needed to do good things to obey Jesus, that He liked good people,” Maria said. “But when Pastor José was telling us about the gift of salvation that Jesus wants to give each of us, I felt something turning in my heart. I wanted Jesus to fill my life and heart. He’s my Saviour now.” 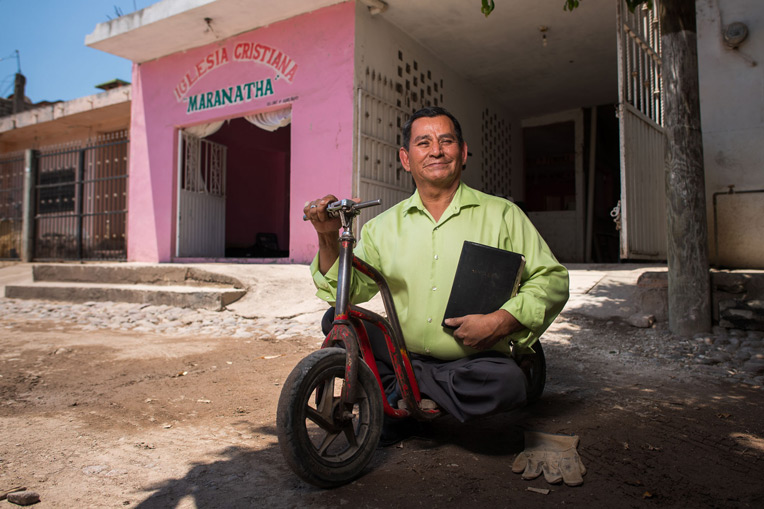 PASTOR JOSÉ BENÍTEZ USES A WORK GLOVE TO PROTECT HIS HAND WHILE PUSHING HIS SCOOTER DOWN THE ROADS OF HIS HOMETOWN IN NORTHWEST MEXICO. HE TAKES THE GOSPEL TO REMOTE MOUNTAIN VILLAGES THROUGH OPERATION CHRISTMAS CHILD.

Maria’s family reads the Bible together regularly—one that her son Ramon, 10, received at his graduation from The Greatest Journey, our follow-up discipleship programme offered to shoebox recipients. Now, most of the families in the village have a Bible that their children received through the discipleship programme.

Ramon said he learned how to pray through the Bible-focused lessons. “I’m teaching my whole family to pray,” he said, “to ask Him to be with us every day.”

There are no established churches in La Laguna, but Pastor José hopes that Eusebia’s Bible study is the beginning of a congregation that will continue for generations.

“The children and their faith are going to be like a greenhouse,” he said. “They are the future of the church because they are learning about God, receiving Him, and they are telling their parents about Him.” 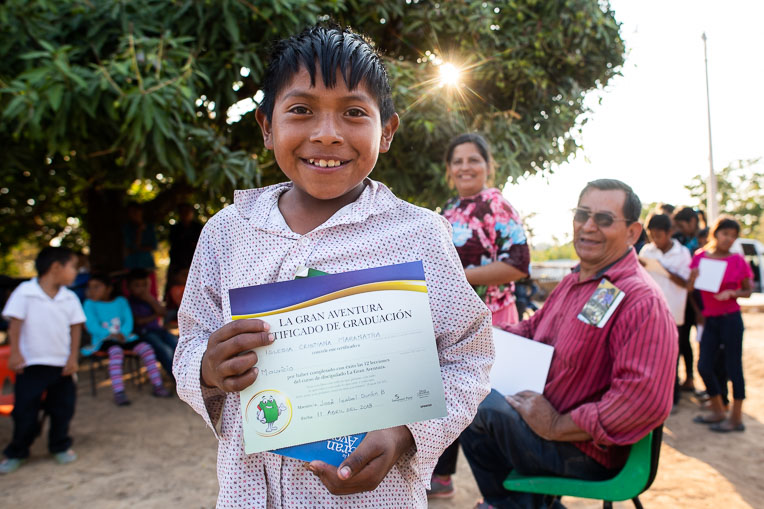 MAURICIO IS ONE OF NEARLY 80 CHILDREN IN THE REMOTE MOUNTAIN VILLAGE OF LA LAGUNA, MEXICO, WHO HAVE GRADUATED FROM THE GREATEST JOURNEY AND ARE SHARING GOD’S WORD WITH THEIR FAMILIES.

Pastor José returns to La Laguna whenever he can to continue to disciple the believers. Even with the recent construction of a dirt road, the journey into the mountains is still rough on the jarring, uneven rock. Punctured tires are common.

Without a car of his own, Pastor José relies on fellow church members in Tecuala who drive him to the village every few weeks.

When he was just 2, José began to exhibit signs of Polio, which inhibited muscle development in his legs. He gets around with a scooter he pushes with his hand. “For most of my life, I’ve used this scooter as my feet,” he said. “I could use a wheelchair, but it would be more difficult for me to move around in it.”

Pastor José’s goal is to reach people in more mountain villages with the Gospel through Operation Christmas Child.

“I’m still looking for new places to share the Word so every kid can learn about God,” he said. “We have a mission on the mountains that started with La Laguna. As people are accepting God and sharing His Word, the message is spreading.” 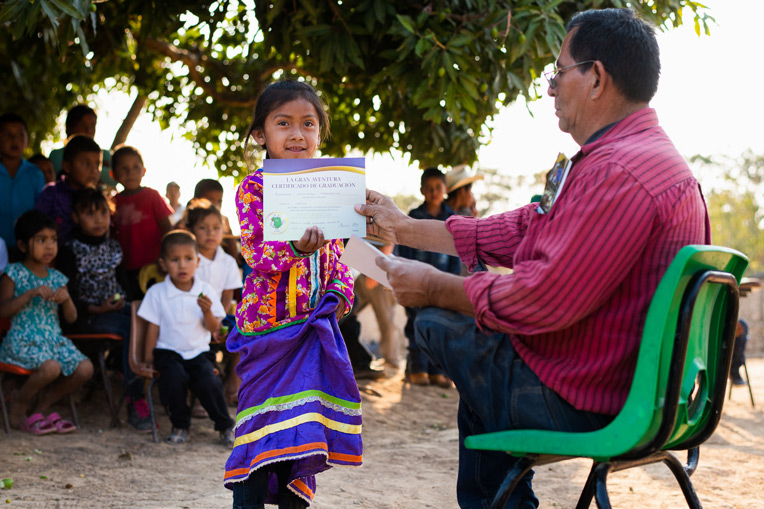 LIDIA, 6, WALKED A MILE TO LA LAGUNA TO ATTEND THE GREATEST JOURNEY CLASSES, INCLUDING A GRADUATION CEREMONY WHERE SHE RECEIVED A BIBLE. HER FAVORITE VERSE IS, “LET THE LITTLE CHILDREN COME TO ME” (MATTHEW 19:14).

Operation Christmas Child a project of Samaritan’s Purse, has partnered with local churches in more than 100 countries to distribute gifts to boys and girls in need and tell them about God’s Greatest Gift—Jesus Christ.

You can be a part of this exciting international evangelistic outreach by prayerfully packing a gift-filled shoebox! Learn how to pack a shoebox.